All That Jazz @ Northwest Film Forum In 1979, the drunk, chain-smoking, womanizing, and monumentally influential director/choreographer Bob Fosse made All That Jazz, a drama about a drunk, chain-smoking, womanizing, and monumentally influential director/choreographer named Joe Gideon. The narrative is about as thinly veiled as vellum paper (an early draft of the screenplay didn’t even include pseudonyms for the many real-life figures), and nobody believed in Fosse’s genius more than Fosse himself. In lesser hands, this sounds like an obnoxious prospect.

Fortunately, it happens to be an astonishing work of cinema. Accolades-wise, it won four of its nine Oscars nominations and, at the Cannes Film Festival the following year, it received the Palme d’Or over a hefty lineup including Hal Ashby’s Being There, Akira Kurosawa’s Kagemusha, Samuel Fuller’s The Big Red One, and Dennis Hopper’s Out of the Blue.

Aside from Roy Scheider’s astounding central performance as Gideon, the supporting cast is an embarrassment of riches, including Anne Reinking as, essentially, herself, Leland Palmer (not the Twin Peaks one) standing in for Gwen Verdon, Ben Vereen reuniting with his Pippin director and nailing his central musical sequence, and a young Jessica Lange as an angel of death.

If you’d like a whole other, lighter side of Bob Fosse after catching All That Jazz, swing by Scarecrow and pick up Give a Girl a Break, the 1953 Stanley Donen-directed Technicolor backstage musical headlined by Marge and Gower Champion. Here’s a 26-year-old Fosse wooing Debbie Reynolds. 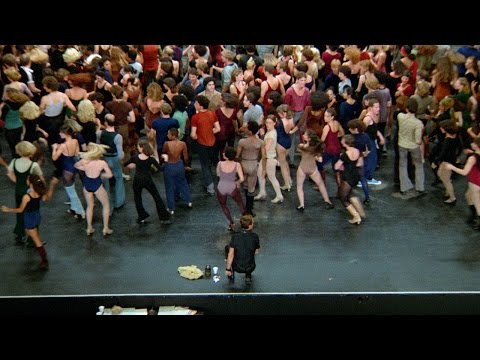